Mean Machine takes Day 1 of the Cagliari Event with two firsts and a fourth.

Undoubtedly after some soul scratching since Marseille this must come as a big relief.

14:15:43
At the finish it is Mean Machine winning well ahead of Mutua Madrilena with Quantum jusy managing to hold off Bribon on the line, only 2 metres separating them. Platoon took fifth with El Desafio, Paul Cayard back on the helm, in sixth and seventh place in Race 1 going to Matador . Audi Q8 and Artemis both recovered well especially on that last run, to post respectable results.

The second race is due to get under starters orders at 1425h local time and so you might expect three races to be achievable today.

Race 2:
14:26:24
Race 2 is course No 1 bearing 180 degress and distance to WW1 is 2.4 miles, the breeze is in really nicely up to 16 knots and so most crews have been changing to heavier headsails for this race. And the breeze may still build more.

15:49:22
Quantum Racing win their first race here, leading at every mark to extend to a lead of 22 seconds over Bribon, the ever consistent. That first run for Audi Q8, coming down with more pressure on the left of the course looking downwind, was their passport to their second best result yet this season, 3rd, for Riccardo Simoneschi just holding off Mean Machine who have a first and a fourth today to Quantum who have first and third so far. The third race will go under the start sequence in five minutes.

16:41:28
At the windward mark it was Platoon leading from Matador and Bribon. Platoon was quick to take control of the right flank with Bribon in check below them, to round third. And half way down the run it is very close between these three boats. Regatta leader Quantum have work to do in eighth, but seem to have come down the right when again there is more wind in the left, and the Matadors come good and lead into the leeward mark.

17:09:45
At WW2 the Russian crew are hanging on to the lead with their new boat, the former USA-17, with Mean Machine round in second and Matador third, Bribon fourth and Artemis in fifth. For 1711hrs local time the breeze has held up well at 14 knots with no sign of it collapsing. Quantum need a leap if they are going to dock toight as regatta leaders, while Mean Machine have been consistent through the day and may yet upset the Russians’ victory hopes….

17:18:40
At the finish of race 3 it is Mean Machine, 2. Rusal Synergy, 3 Matador, 4 Artemis, 5 Bribon, 6 Quantum, 7 Mutua Madrilena, 8 Platoon, 9 CxG, 10 Audi Q8. And so leading the Audi Region of Sardinia Trophy regatta it is Mean Machine and on the Audi MedCup Circuit 2008 it has been a good day for Bribon who will have extended their lead and Quantum and Artemis have swapped places with Quantum now second overall on the Ciruit. 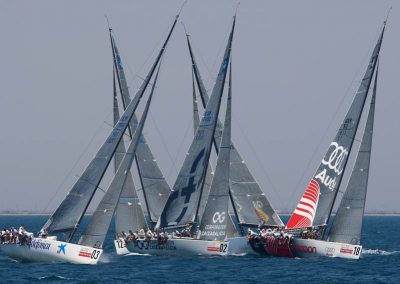 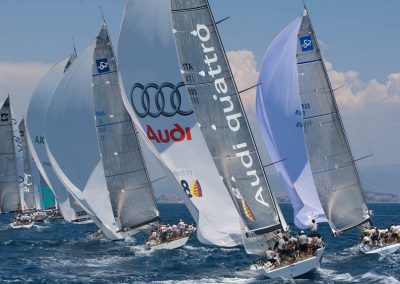 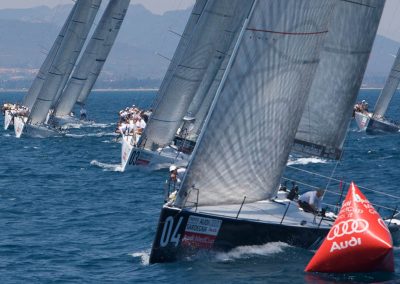 Back
← Back in business! Quantum Means Business! →