TP52’s battle in Top of the Gulf Regatta in Thailand

The final day of racing at the 2011 Top of the Gulf Regatta saw idyllic, tropical sailing conditions and lots to sail for with many classes going down to the wire. Over 30 nationalities enjoyed four days of testing racing off Ocean Marina Yacht Club, Jomtien Beach, Pattaya, Thailand.

The Top of the Gulf Regatta saw one of the largest fleets ever in Thailand (and Asia) with 49 entries in the keelboat and ocean multihull classes (course one), 61 in the beach catamaran and monohull dinghy classes (course two), and 129 Optimists (course three) – a total of 239 boats.

Courses two and three finished yesterday with winners being presented series prizes at the Gala Dinner sponsored by the Ocean Marina Yacht Club, with today the final day of racing for keelboat and multihull classes.

Regatta Race Officer, Simon James, managed to complete two races today for all keelboat and  multihull classes, and squeezed in a third race for the one-design Platus.

The IRC Racing 1 class enjoyed the company of the International Jury with a series of protests, dismissals and hearings being re-opened, which resulted in a disqualification on Day 2 for Hi Fi (Neil Pryde) and a final protest being withdraw by Team Premier (Johannes Waimer). The outcome of this, and the disqualification was critical in the final top three placings.

In the two races today, Hi Fi pulled out all the stops taking two bullets in what were very close battles on the water, with Team Premier in second (both races) and Evolution Racing (Ray Roberts) in third (both races). The standard of racing was some of the best-ever seen in the seven years of the Top of the Gulf Regatta and with that comes pressure and a deep desire to win, resulting in ‘battle by protest’.

After all protests have been taken into account, the winner of the IRC Racing 1 class for the 2011 Top of the Gulf Regatta was Team Premier from Hi Fi in second and Evolution Racing, third. 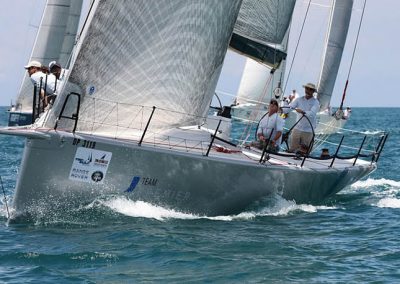