Michael Hiatt and his Living Doll crew had nerves of steel today, making a comeback to steal the Audi IRC Division 1 series from under the nose of Graeme Wood and his Wot Now crew – the two finished second and third respectively in Race 6 to finish the series on tied points, Hiatt coming out on top with one more win in his score to settle the series.

The final windward leeward race was put to bed this afternoon after a delayed start due to lack of breeze, but a nice 10-12 knot sea breeze filled in on Corio Bay just before midday, allowing racing to get underway.

However, by the time the yachts came up the work the second time, Hiatt, a Melbourne businessman, had a big lead over Wot Now and her crew could only look on as the Farr 55 kept up the momentum to score second place overall, Wot Now finishing third to seal the deal.

Hiatt was thrilled. Having had a couple of teething problems with his yacht which forced him to cancel competing in the Rolex Sydney Hobart, everything came together in Geelong.

“We overrode Lloydy (tactician Ross Lloyd) on that first beat and Wot Now rounded in front of us, but we gybed inside them and caught up a bit of time on them on that first downwind leg. After that we picked them up bit by bit. We picked the shifts right – someone up there was looking after us.”

“We got away from them after that and were able to sail our own race in clear air. It’s great to win,” said Hiatt who has confirmed he will be taking Living Doll to Sydney to compete in the Audi Sydney Harbour Regatta in March and then the Audi Sydney Gold Coast race in July in an attempt to win the 2009 Audi IRC Australian Championship.

Sydney yacht, Loki, finished the series in third place overall. A brand new Reichel/Pugh 63 owned by Stephen Ainsworth, Loki performed well throughout the week and spectators were treated to some fine racing, particularly against a second new Reichel/Pugh design, Limit.

The six race-one drop series at Skandia Geelong Week was conducted by the Royal Geelong Yacht Club in Victoria. 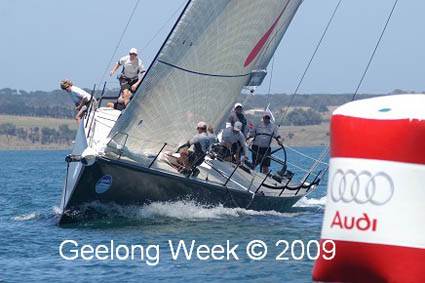